History, description and the basics of fermentation 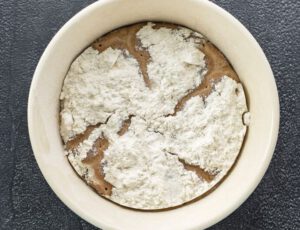 Together with beer production, the production of sourdough is one of the oldest fermentation processes in the history of food. Sourdough fermentation has been around for a long time, because any dough made from flour and water that is left to its own devices for a long time is acidified by the bacteria present in the flour. Findings from Egypt and Greece show that sourdough already existed 1800 years before our time.

A look at the past

One of the oldest methods of food conservation is fermentation, using lactic acid bacteria and yeast. Wine, cheese, bread and beer were all produced in ancient times. However, science has been studying fermentation processes for roughly the last 120 years, because the production of fermented food is not always easy. Before the introduction of compressed yeast (baker’s yeast), Parmentier, (1802) a French pharmacist and agronomist, described the following experience with yeast: “A sourdough process can be changed in the blink of an eye. A storm, a southern wind, etc, are enough to cancel its effectiveness. How many times have we heard bakers cursing?”. In the 1890s Emil Christian Hansen introduced the yeast culturing apparatus. This made it possible to grow individual cells from the laboratory into larger cultured quantities. The use of this apparatus spread quickly, especially in distilleries and breweries. For bakeries, however, it was still common that when a fermentation failed, the bakers would obtain another acid culture from a neighboring dairy or bakery. This was a common practice, but not always successful. Inspired by a friend who was a baker, Ernst Böcker, master distiller from Minden, made attempts at the beginning of the 20th century to apply the technology of artificial yeast culturing to lactic acid bacteria for the bakery industry. These efforts resulted in an Imperial Patent for “Apparatus for souring dough and the like”. This discovery was the foundation stone for our family company.

Sourdough is a special case in fermented foods. From no other food have such a number of different microorganisms been isolated. Most are specific to the process of sourdough fermentation and have only been found in sourdough.

Sourdough in the past and today

Sourdough is not just a mixture of flour and water. Sourdough is a product of fermentation from lactic acid bacteria and yeast. The sourdough itself is not for consumption, it is an intermediate product in the production of bread and baked goods. The sourdough process is microbiologically complex and has to be controlled by temperature and time. In the past, sourdoughs served primarily to initiate the process and to loosen the dough, but this became less important after the introduction of baker’s yeast at the beginning of the 20th century. In addition to loosening the dough, sourdough also had the important property of making rye flour bake-able. This problem has been overcome, however, by the breeding of new rye varieties that have significantly lower enzyme activity, so this property of sourdough has lost some of its importance. Today sourdoughs are used in many different ways. Sourdough starters are used to initiate a sourdough, while liquid, dry and paste sourdoughs can be added directly to the dough (ready to use). This eliminates the need for an initial, time-consuming and difficult step of producing a sourdough. Sourdoughs are also becoming increasingly important as flavor and aroma enhancers. Dried sourdoughs in particular ensure intense roasted aromas in baked goods. For this reason, baked goods made from wheat flour are increasingly made with sourdough.

The uses of sourdough

Over the course of time, very many different fermentation processes have emerged, based on practical experience and observations. But in the case of both wheat and rye, these innumerable variations can be traced back to two principles: single step (e.g. Detmold one-step process) and multi-step processes (e.g. Detmold three-step process - Panettone production). Both methods have advantages and disadvantages.

A baker is in reality a biotechnologist, since he grows lactic acid bacteria and yeast in his sourdough fermentation. Depending on the microflora used and the type of yeast, there are a few basic rules to follow. The most important is to maintain the correct temperature. The choice of the right temperature depends on the type of microflora used. Equally important is the amount of yeast, and to adhere to the correct fermentation times. This applies to every step of the sourdough fermentation, to avoid problems such as a less-matured sourdough. The type of process, be it single-step or multi-step, will define the operational requirements, and both can guarantee a high-quality sourdough if followed correctly.

Our products can be used in many food sectors. We made a brief subdivision to help you on your way.

Are you looking for ingredients for your gluten-free product? Or do you prefer vegan? We follow current trends in health and nutrition.